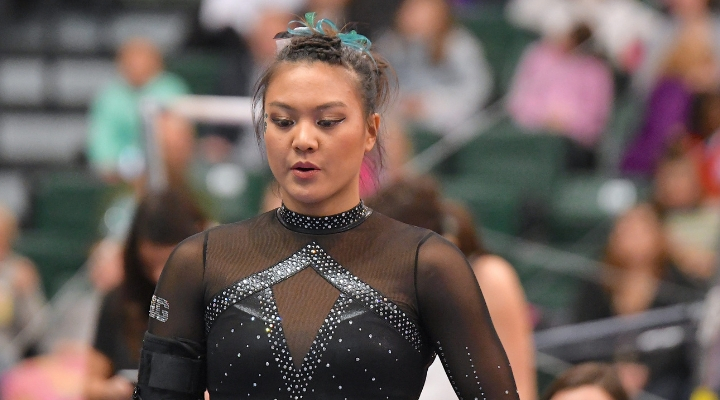 Between interning and travelling abroad, classes, and being a Big Ten student athlete, senior Experience Architecture major Anna Gamelo has plenty to show for her time at MSU.

Gamelo, who has consistently been on the Dean’s List the last four years, first became interested in Michigan State University when she learned about its Experience Architecture (XA) program.

“It suits my interests more than classic architecture, but it does involve the work of an architect, just not in the same way,” she said. “An interesting thing about the program is you are able to work on projects that actually interest you. In each class, you can personalize your projects to an extent that allows your creative mind to express itself. I believe that is my favorite part about being in the major.”

Gamelo says she also enjoys the fact that XA is a smaller major, allowing her to connect and interact with classmates and professors more.

“It’s fun growing through this major together and being able to know almost everyone in all your classes,” she said.

The skills Gamelo has gained from her classes, like pitching ideas, doing constructive research, meeting deadlines, group work, presentations and handling clients, she says are helping her become a more well-rounded professional and preparing her for life after MSU.

This past summer, Gamelo took those skills to Shanghai, China, where she obtained an internship through an MSU alumnus, who she was able to work with during the three months she was in China.

“Most of my work involved English editing and translation, but I also was given opportunities to sit in client pitch meetings, create a slideshow pitch, and do research for the public relations and marketing sector,” Gamelo said. “It was an amazing experience. I highly recommend going abroad at least once while attending university.”

When she wasn’t working, Gamelo traveled around Shanghai and to Beijing, Suzhou, and Hangzhou.

Besides academics and experiential opportunities, Gamelo recently retired from gymnastics after exhausting her four-year collegiate eligibility as a member of MSU’s women’s gymnastics team.

“Gymnastics has helped me develop over the years,” she said. “I learned things like time management, discipline, hard work, and responsibility.”

Being on the MSU gymnastics team also gave Gamelo the opportunity to be in a team environment and connect with her peers.

“It’s fun sharing our successes, pushing each other to do our best, and having people to support you even when you feel like you’ve failed,” she said.

During her gymnastics career, Gamelo earned many honors. For the past three years, she’s been a Scholastic All-American, a Big Ten Distinguished Scholar, an Academic All-Big Ten Selection, and attended the Student-Athlete Academic Excellence Gala with highest honors. She also is a four-time varsity letter winner and was named a Student-Athlete Academic Scholar for 2017.

“I’m now taking a break from the gymnastics/athlete scene and trying to experience normal student life since I hadn’t had that since I started the sport,” Gamelo said. “It’s a very different experience and it’s interesting to see how my decisions no longer revolve around sport but based on other priorities.”

Gamelo plans on graduating in May 2019 and would like to return to Toronto, Canada, where she is from and look for a full-time job there. She also would like to travel a little and catch up with friends before she is employed.